On September 6, 2011, I was introduced to a beautiful new grandson named Owin. All outside appearances indicated that he was a healthy, handsome little man, and I remember being simultaneously thrilled, thankful and a bit taken aback by the new addition to our family.

What made me a little uneasy was his mom, Karee, matter-of-factly saying that “We would know for sure how healthy Owin was when the doctors completed their newborn testing.”

A few days later, Karee called our house to talk to her mom, Karen. “Mom,” she said (you could tell she was fighting back tears). “We got some news back from the doctor. Owin has cystic fibrosis.”

I remember looking at Karen with kind of a blank stare, not having any idea what cystic fibrosis was. This was my first introduction to the disease is as it hit home right in our own family.

Three years later, we had our next introduction to cystic fibrosis. It came in the beauty of a little girl, whose name is Rori. Rori is Owin’s sister.

From the moment Rori was born, I knew she was full of spunk. Unfortunately, we received the same kind of call as we had with Owin. A few days after her birth, we learned that Rori also has cystic fibrosis.

My grandchildren have undergone a lot over the years to keep their health in check. Along the way, I’ve developed a passion for educating others about the disease. My family and I are also doing what we can to help find a cure for this very difficult disease.

What is cystic fibrosis?

Cystic fibrosis is a genetic disease that comes from both parents, as each parent must carry at least one copy of the defective gene in order for a child to be born with the disease.

Any abnormality in the cystic fibrosis gene is called a mutation. Currently, there are about 1,700 known gene mutations that can cause cystic fibrosis. Most testing for the disease only screens for common disease mutations. More than 30,000 people in the United States today live with cystic fibrosis, and more than half of those people are older than age 18. Approximately 1,000 new cases of cystic fibrosis are diagnosed each year.

Why is cystic fibrosis so difficult to treat?

Cystic fibrosis brings with it many different battles. According to the Cystic Fibrosis Foundation, It is a genetic disease that affects the lungs, pancreas and many other parts of the body. A buildup of mucus in a patient’s lungs clogs up airways, making it very difficult to breathe. This sticky mucus also traps bacteria and makes the person very susceptible to lung infections, lung damage and respiratory failure.

In the pancreas, the clogged mucus prevents the body from releasing enzymes used for digestion to break down food and absorb vital nutrients.

What are the symptoms?

Symptoms of cystic fibrosis include (but are not limited to):

What does a day with cystic fibrosis look like?

Each day, Owin and Rori take many different medications. The last time I was at their house, the top of their dishwasher was covered with pill bottles and boxes of medications, including pancreatic enzyme supplements to improve the absorption of nutrients into the body.

Along with these medications, the children also must work to keep their airways open with several breathing treatments and other therapies each day. Daily nebulizer treatments supply antibiotics to help them fight lung infections.

Both children have learned to do other things – such as playing a game or watching TV – while getting their breathing treatments.

Comparing the amount of medications that these children take every day to the three I take every other day sure makes my medication regimen seem like nothing to me.

Normal, active and energetic in every way

One of the many struggles that Owin and Rori’s parents, Karee and Zack, have every day is being sure that both children have enough salt in their diet. Children with cystic fibrosis have a higher concentration of salt in their sweat and need to replace any salt that is lost. Often, their water must include added salt to make up for the salt that is lost. 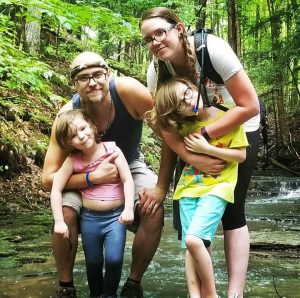 In spite of all this, Owin and Rori are two of the most normal, active and energetic children I’ve ever known. Now ages 7 and 4, Owin is in 2nd grade, and Rori is not in school yet. Owin has played soccer on a team at his local soccer facility. Both children love hiking, swimming and having picnics with family and friends.

Here’s why I support the Cystic Fibrosis Foundation

I hope this explanation of cystic fibrosis has helped show what the disease is all about and what people who live with it every day of their lives go through.

Because it’s so close to me and my family, we all have become very involved in supporting and raising funds for The Central New York Chapter – Syracuse Office of the Cystic Fibrosis Foundation.

For our family and for others who support the Cystic Fibrosis Foundation, we made a commitment to never stop fundraising and working toward a cure until “CF stands for CURE FOUND.” In a world where so much uncertainty exists, that’s something you can count on.

The Cystic Fibrosis Foundation is there and will be there for families like ours that have been affected by this disease.