Losing weight is…well, hard! Eat healthy, be more active…you know the drill. But getting started and sticking with it are two of the hardest parts. So, what if you had someone to keep you on track, was always available, and never said no? Would it also help if they were one of your best friends?

If you answered yes, the answer may be just a few feet away from you.

If we’re out of shape, then our pets probably are too. About 54 percent of dogs (and 58 percent of cats) are overweight or obese, according to the Association for Pet Obesity Prevention. About 2 in 3 upstate New York adults, meanwhile, are also overweight or obese, according to an Excellus BlueCross BlueShield report. Heavier adults are at risk for serious chronic diseases and health problems. But, did you know that obese pets also face many of the same health problems as humans, such as diabetes, high blood pressure, arthritis, urinary disease, skin problems, and breathing problems. Also, overweight pets often have shorter life spans (up to 2.5 years less). Taking steps to stay in shape with our pets may help keep them around longer.

Taking “steps” to be active

In 2015, the U.S. Surgeon General encouraged people to be active and walk more.“ Strong evidence exists that physical activity has substantial health benefits,” according to “Step it Up! The Surgeon General’s Call to Action to Promote Walking and Walkable Communities.” “Walking is an excellent way for most Americans to increase their physical activity.“

It’s a simple formula. One overweight adult + one overweight dog = one really good reason (and motivation) to lose weight together. One easy way to get started would be to just go on regular walks together a few times each week. 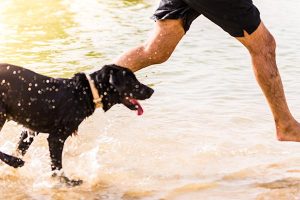 A walk or a run can be great exercise.

Brad, a 6-foot-6-inch former athlete, had a wake-up call in his mid-30s. His doctor said he was at risk for heart disease and other health problems, such as diabetes and stroke, because of his weight and lack of exercise. He adopted Buddy, a black Labrador retriever. ”The energetic dog became Brad’s running buddy and ticket to better health. “  (More on the story of Brad and Buddy.)

Couch Potato to Athlete – The Story of Eric and Peety

Eric, a 57-year-old salesman from Spokane, Washington, says “a plump dog named Peety helped turn him from a couch potato struggling with obesity into a slim athlete.” Eric weighed 330 pounds. He lived by himself and would often eat two extra-large pizzas (consuming potentially thousands of calories) for dinner. He spent more than $1,000 a month in medications for type 2 diabetes, high cholesterol, and high blood pressure.

One month before Eric was due to have weight-loss surgery, he was advised to eat a whole-foods diet AND to rescue a dog. The thinking was that having a dog might force Eric to get outside and be more active. (Maybe he’d even meet other people?) Peety, a 7-year-old border collie/Australian shepherd mix, “came into his life and changed it forever.” More on how Eric and Peety changed each other’s lives  (Their video.)

The Tale of Otto the Bulldog 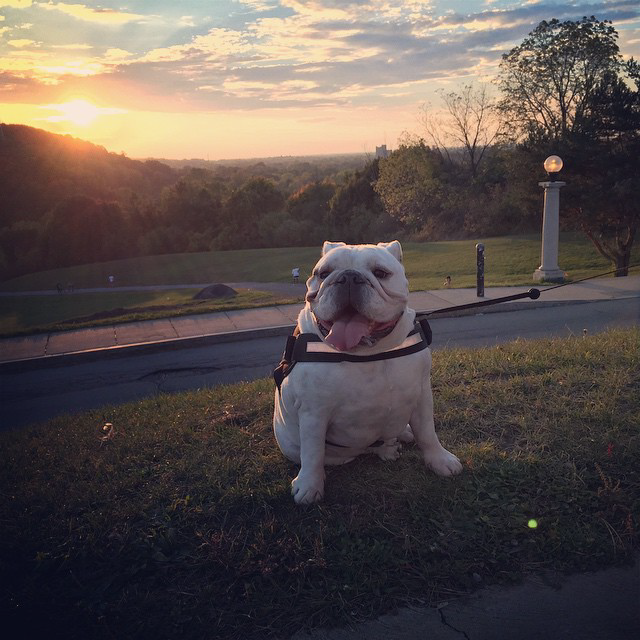 “Typically you can’t get an English bulldog off the couch, let alone walk more than 50 feet,” says Brittany, a digital marketing manager from Rochester, NY. “Ever since he was a puppy, Otto, our 6-year-old English Bulldog, has enjoyed going on walks.”

As he grew older though, Otto’s vet wanted him to drop from 65 to 55 pounds. Brittany gradually extended their typical route. “We often forced him to take breaks, just to catch our own breath!” Combining longer walks with better food, Otto has dropped down to 50 pounds, has a softer coat and is happier than ever. “No need for a Fitbit® alarm – Otto reminds us to walk every day with a long, dragged out whiny mumble. What a great way to unwind after work, talk about our day, and get our steps in as a whole family.”

Set up a routine and stick with it

The philosopher Lao Tzu had a saying that went something like, “The journey of a 1000 miles begins with one step.” If you’re just getting started, go for shorter walks, gradually increasing them as you feel comfortable. It’s important to set up a routine. Try walking at the same time every day. Dogs like routine and will likely come and encourage you on those days when you may not feel like it (just like Otto).

Also, if your friend or neighbor has a dog, maybe you can walk together.

Keep safety in mind for both of you. Stay hydrated. In hot weather, try going early or later in the day when it may be cooler. In cold and snowy weather, wear good boots and check their paws for snow and ice buildup.

Nutrition is also an important part of the puzzle.

“If food were in front of your dog all day, they would likely keep eating. We often have the same instincts.” says Janette Westman, a workplace wellness consultant at Excellus BlueCross BlueShield. “A dog’s food is controlled by their environment. The owner puts it out when it’s time to eat and controls the amount. We could create a similar environment for ourselves. By reducing how much food is constantly in front of us, we could be less tempted to snack all day long as well. Also, planning ahead is another way to make healthy eating easier.”

You can also try modifying some of your habits using the “Five Rules for Eating” from Stephen Cook, M.D., MPH, Assistant Professor of Pediatrics at the University of Rochester Medical Center. If you do choose to snack during the day, there are healthy options that can give you a boost between meals. Try keeping a banana, apple, or a handful of almonds handy. Pat Salzer, a registered dietician for Excellus BlueCross BlueShield, has suggestions for healthy snacking throughout the day.

What about healthy eating for my dog? According to the American Kennel Club, there are things you can do to prevent them from packing on unnecessary pounds, like establishing a regular eating schedule, limiting between-meal snacks, and choosing low-calorie treats.

Don’t already have a “workout” buddy?

Consider adopting/rescuing a dog. Check with your local animal rescue organization if interested in pet adoption. Some will allow local volunteers to come and walk their dogs. That can also be an option if you’re not quite ready to adopt.

Please consult with your doctor before beginning any diet or exercise regimen for yourself and a veterinarian for your furry friend.