It’s funny how life can come full circle. Matt Mersfelder of Syracuse has experienced it firsthand. His first “real” job as an adult was with Arc of Onondaga. The nonprofit organization assists individuals who have developmental disabilities achieve their fullest potential. 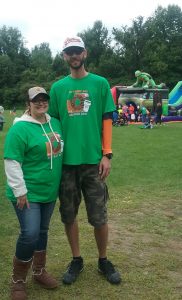 Matt and his wife at the Arc of Onondaga event on Sept. 9.

In fact, Matt credits the traits he learned at Arc of Onondaga — patience and a willingness to listen – with helping him at his next career as a customer service advocate for Excellus BlueCross BlueShield.

Although he now works elsewhere, Matt and his family never stopped supporting the Arc of Onondaga. He completed “The Dunkin’ Run Arc Race” on Sept. 9 at Long Branch Park in Liverpool, N.Y. Matt, his wife and two children also volunteered at the event’s Family Fun Zone.

“We want to ensure that all families are given the best experience possible,” he said.

Arc of Onondaga: More than a job

Matt pretty much fell into his job at Arc of Onondaga. He worked the evening shift in a residential facility four days a week for 10 hours a day.

“I told myself this job would be a temporary thing until I found out what I really wanted to do,” he said. Two years later, he realized it was more than a job — it was a calling.

“I became very involved with the residents and truly felt that I was having a positive impact on their lives,” he said.

After picking up residents from either their day program or work, he would have the residents help him make dinner and get ready for the next day. Working on daily living skills – such as making their own meals – was the majority of the job, Matt explained. The goal was to help them live independently.

He held several jobs at the Arc of Onondaga. Eventually, he served as a residence coordinator, running the day-to day operations of two residential sites.

“This proved to be the biggest challenge of my life,” said Matt. “My job duties seemed to never end, no matter what day of the week or what time of the day or night it was.”

Time for a radical career change

Although the job was very demanding, Matt tackled it with diligence and care. All the while, he was honing his time management and problem-solving skills. He remembers putting out a lot of “fires.”

He loved the Arc of Onondaga and its clients. But Matt at times felt overwhelmed with all of his responsibilities. By this time, he had a wife and two young children.

“I couldn’t give my family the care and attention they needed while simultaneously serving as a residence coordinator at Arc of Onondaga,” he said.

Although his “temporary” job with Arc of Onondaga had stretched out over a decade or more and gave him great satisfaction and a feeling of pride, Matt decided to take another chance by making a radical career change.

The person I am today

It was a leap of faith that made Matt apply for a customer service advocate position at Excellus BlueCross BlueShield.

He was well aware that he had no experience in customer service. So, he approached the interview with a positive attitude and the willingness to learn and work.

That was what he needed to land the job. “Some people had an open mind and saw what they believed to be potential,” he guessed.

“After I got past my initial jitters of talking on the phone, I found that I actually enjoy providing customer service a great deal,” he said.

In his new position, he calls upon the same traits — patience and a willingness to listen — that helped him succeed in his job with Arc of Onondaga.

With his former employer, he had to keep an open mind, look for the potential among the people he served and support them in their efforts to do well. In his new position, he feels that his new employer took a chance with him and now encourages him to excel at every turn.

“All of my experiences with Arc of Onondaga made me the person I am today,” Matt said.

That’s why the opportunity to support one of Arc of Onondaga’s major fundraisers was especially important to him this year.