Chris Gorecki is about to tackle his seventh straight Tour de Cure.

He doesn’t participate in the diabetes fundraiser because he’s an outdoor cyclist. In fact, he usually has to rent a road bike for the event.

Chris rides because his younger brother battles Type 1 diabetes. He rides for his brother’s kids (ages 6, 8 and 18 years old) and because his brother almost died from complications of diabetes.

This year, Chris stepped up as leader of the Tour. He’s serving as chair of the event for the American Diabetes Association in Rochester, New York. As chair, he’s issued an unusual challenge to the Rochester community: Become the #1 tour in the nation.

Given that diabetes is such a serious health concern, Chris was surprised at how little he knew about this disease that was hurting his younger brother, Craig, who lives in Arizona.

“What do you mean he almost died?”

Chris recalled the day about 10 years ago when his mom called to tell him Craig had almost died. His brother had really high blood sugar levels, landed in the hospital and almost lapsed into a coma.

“’What do you mean he almost died?’” he recalled asking his mother. “I was in shock. I had no idea that diabetes was so serious that you could die from it. It was a big eye opener for me.”

Craig continued to struggle with the disease.  Once, his blood sugar levels were so low  that he passed out while at work and ended up with a broken shoulder and bitten tongue.

He also faced workplace discrimination.  Shortly after being hired for a new job, Craig’s manager found out that he had diabetes and made the work environment very unpleasant for him.  Craig had a talk with his manager and let him know that an employee could not be fired for having diabetes.  Needless to say, Craig found another job very quickly.

Before his current job—as a senior vice president at Excellus BlueCross BlueShield in Rochester — Chris worked in Napa Valley and served as chair of the ADA board there.

Now living in Rochester, Chris is leading the Manning & Napier Tour de Cure. It’s the second largest ride in the country; last year the fundraiser took in more than $1 million to fight diabetes. For the Manning & Napier tour to finish at the top in 2017, the Rochester team would have to beat Chris’ old organization—the riders of Napa Valley.

Chris said he’s relishing in the competition between his old and new friends.

“’Beating Napa’ is about raising awareness,” Chris said. “It’s about learning more about friends and family who have the disease and realizing how hard it is for them to keep themselves healthy.”

“In the end, I hope something good comes out of all of this,” he added, “whether it’s a cure or something new that really helps those with diabetes.”

Diabetes is a disease where the body doesn’t produce or properly use insulin to digest sugar (glucose). You can become dangerously sick when your blood sugar is too high or too low.

To keep sugar at normal levels, people with diabetes are constantly watching what they eat, monitoring blood sugar levels, managing how much they exercise and adjusting medication.

“It’s easier to take care of yourself when you have a nine-to-five job,” Chris said. “But my brother is a bar manager, working until the early hours of the morning, and then he’s with his young kids during the day while his wife works.

“He doesn’t have a lot of time to exercise or the inclination to eat well,” he added.

In general, eating healthy and exercising are keys to controlling diabetes. Many people who have diabetes struggle to do the things that help keep them healthy. In upstate New York, tens of thousands of upstate New York adults fail to do what’s necessary to keep their disease in check, according to data gathered by Excellus BlueCross BlueShield. Basic steps include:

When Craig was diagnosed with diabetes in his 20s, he didn’t know a lot about managing the disease. He didn’t change his eating habits, for example, or start exercising more. Chris recalled seeing his brother with an ice cream cone. He didn’t think twice since he assumed diabetes was a disease that was easily managed. 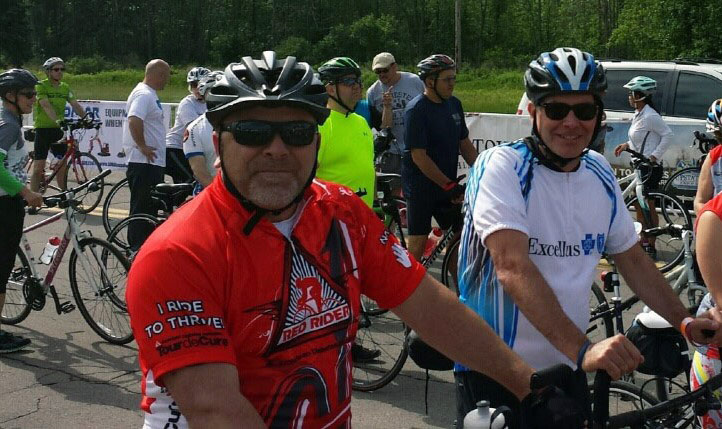 “The hospital incident was a wake-up call for him – and me,” Chris said. “Craig wants to be around for his kids. But it’s hard for him to stick to a healthy lifestyle, especially since he works nights and has a young family. But, he’s trying.”

That’s why Craig will join Chris for this year’s Tour de Cure in Rochester. Chris hopes the cycling event will get Craig exercising more. Plus, he’d love to have his little brother with him if the Rochester tour really does beat Napa.

As Chris picked up his phone, and scrolled through his brother’s Facebook page. He found a post his brother wrote about his involvement in the Tour.

“My brother, my hero,” Craig wrote, noting that Chris used his story to rally folks at a Tour de Cure kickoff event in Rochester. “My brother rules. Thanks for all you do for diabetics everywhere. See you in June. He raises tons of money for diabetic research. Best brother ever.”

If you want to help raise money to fight diabetes, click HERE to register for or donate to the Manning & Napier Tour de Cure in Rochester on June 10, 2017.

Don’t live near Rochester? Click HERE to search for a Tour de Cure event near you.

If you’re a parent of a child with diabetes, click HERE to learn more about Camp ASPIRE. The camp is a weeklong summer camp for kids with diabetes.