Something in Jean Hopkins’ gut told her to take her daughter to urgent care.

It was after school, and her 8th grader didn’t feel well enough for cheerleading practice. She had a slight fever, nausea and was tired. Her daughter said she felt like she did when she had a bladder infection.

Hopkins’ husband wondered whether they should wait until morning for the trip to urgent care. 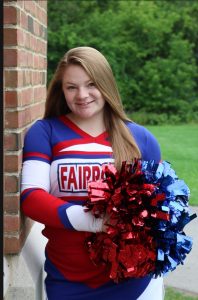 “But something in me told me she needed to go to urgent care now,” said Hopkins, of Rochester.

Her husband took their daughter to urgent care while Hopkins, a youth cheerleading coach, went to practice. By the end of practice, her husband called to say their daughter needed to go to the hospital.

Once in the emergency room, her daughter’s health quickly spiraled downward.

Her daughter threw up green bile that looked like antifreeze. She had dangerously low blood pressure that staff couldn’t control. By 4 a.m. her daughter was in the intensive care unit.

Hopkins’ daughter had sepsis, a condition that can come on quickly and lead to death. Sepsis is the body’s extreme response to an infection. If not treated quickly, Sepsis can cause tissue damage, organ failure and death, according to the Centers for Disease Control and Prevention.

According to the Sepsis Alliance, there are 1.7 million cases of sepsis and 270,000 deaths each year in the United States. The sepsis death toll exceeds annual deaths in the U.S. from breast cancer, prostate cancer and AIDS combined. A recent study reports that  sepsis may have been responsible for 20 percent of all deaths worldwide in 2017.

Hopkins’ daughter did recover. She spent a week in the hospital.

“It’s scary how quickly sepsis can happen,” Hopkins said. “Just listen to your inner voice.  We were very fortunate that everything happened as it should. I don’t want to think about what could have happened if we didn’t take her right away to urgent care.”

“Act fast and get medical care immediately if you suspect sepsis or have an infection that’s not getting better or is getting worse,” said Carnevale.

Barkley Klaiber of Syracuse said she’s grateful. She acted quickly when she didn’t feel quite right and had some abdominal cramping. Klaiber was 20-weeks pregnant with her second daughter. 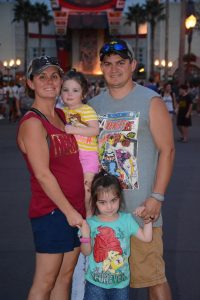 Barkley Klaiber with husband Karl and daughters Sutton and Carson.

Normally, Klaiber would have waited a little before seeking treatment. She figured the cramping was related to kidney stones. She’s prone to getting them when pregnant.

But Klaiber had just been in a minor car accident a few days earlier. She thought she should go to the emergency room as a precaution.

Turns out Klaiber did have kidney stones, along with a bladder infection. But she had also developed a kidney infection as a result. Barkley went into septic shock after arriving at the hospital.

Barkley did recover after a 9-day stay.

“The car accident was a blessing,” she said. “Otherwise, I don’t think I would have gone to the emergency room as quickly. If I had gone into septic shock and I wasn’t in the hospital? I don’t want to think about what could have happened.”

Her daughter remained strong throughout the ordeal. “We just celebrated her second birthday,” she said.

Anyone can get sepsis. But those at higher risk include babies and those with chronic conditions or weakened immune systems.

The elderly are also at high risk. Meg Thoin of Buffalo said her 86-year-old mother died of sepsis about a week after breaking her hip. She was in rehabilitation at a nursing home when her mom started suffering from diarrhea and confusion, and then nausea and vomiting.

Her mom was transferred to the hospital. She had kidney failure and had become septic. She died the next day, Thoin said.

“My hope is that others become more aware of what sepsis looks like, especially if you have elderly family members or if you know someone who is in a hospital or nursing facility,” she said.

There are a variety of warning signs associated with sepsis. The most common signs include:

“I was an educated person,” added Thoin, who is a nurse. “I knew what to look for, and I really wished I pushed harder for her to be tested when I started to notice certain symptoms.”

Excellus BlueCross BlueShield is proud to provide educational content regarding topics such as sepsis. For more information, view our infographic on sepsis.