“Mark,” a preschooler, always seemed to be getting in trouble, acting out and having a hard time learning. Turns out, there was good reason. He had double vision. Until the McGraw Lions Club screened him as a part of their “see” program, his condition had gone undetected.

“At that age, he was still not verbal enough to perform an eye chart test. We performed a vision screening for him and found he needed to be referred for further assessment by an eye doctor,” said Cathi Bernardo, president of the McGraw Lions Club.

Mark’s parents took him for a comprehensive eye exam. His eye doctor diagnosed him with double vision and prescribed glasses. Once his double vision was corrected, he not only did better in preschool, but behaved better, too.

“In one year, this small change made a huge difference in his life. Now he can start kindergarten on time rather than be held back,” said Bernardo

“If the diagnosis had been delayed, he might have struggled more. But the camera caught that something was going on.”

A Camera of Their Own.

The McGraw Lions Club bought a screening camera in the spring of 2017, thanks to funds from an Excellus BlueCross BlueShield Community Health Award. Before, they had used a camera shared among 30 other Lions Clubs throughout the state. With their own camera, the McGraw Lions have dramatically increased the number of screenings they perform. With more screenings, they can identify eye disorders in more area children and help them get treatment.

Bernardo says current camera technology is a major improvement for screening children for vision problems. In the past, the screening consisted of the child covering one eye and identifying letters and numbers on a chart. The test was geared for older children who knew how to read, talk, and sit still during the test.

Now, the Lions simply take a picture of the child’s eye from about a meter away using their special camera. The camera can detect amblyopic disorders, where vision in one eye is reduced because the eye and brain are not working together properly. The camera can also detect nearsightedness, farsightedness, and other irregularities. Capturing the image takes less than 10 seconds and requires no action from the child. Even restless or non-verbal children can be screened fairly easily.

The camera produces a report that categorizes the result as either a “pass” or a “refer.” If a child gets a “refer,” the Lions recommend that the parents take the child to see an eye doctor for a comprehensive eye exam. The Lions do not diagnose disorders or recommend treatment.

When Should I Check My Child’s Vision?

Children should have comprehensive eye exams early and often, starting at 6 months of age, according to the American Optometric Association.

Many parents, especially those juggling work schedules and transportation issues, struggle to get their child to the eye doctor or may put it off entirely. By providing free screenings, the Lions draw parents’ attention to the importance of eye health, helping ensure children who need professional examination get it. The Lions also help with the cost of glasses for children whose families may have trouble affording them.

McGraw Lions Club members perform eye screenings for children in schools, preschools and churches throughout Cortland County. They screen youth up to the twelfth grade, but primarily focus on children between the ages of 6 months to 6 years. The earlier in life an eye disorder is discovered and treated, the better the outcome for a child’s vision.

“About 10 percent of kids from birth to 6 are going to have something that needs to be treated. We want to detect those children and get them in to the health care system for proper treatment,” said optometrist Dr. Edward Cordes, national chairman of the Lions KidSight Foundation and past International Lions Club director. 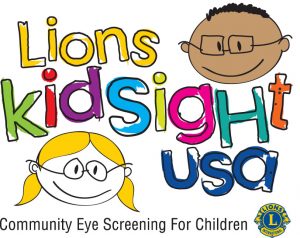 Screenings have even proven to be life-saving, helping uncover two cases of a rare childhood cancer of the eye, retinoblastoma. Without the screening, the cancer may have advanced without the parents’ knowledge.

Knights of the Blind

In their earliest days, Lions clubs throughout the world adopted eye and vision health as a central cause. Speaking at a convention in 1925, Helen Keller, who was a Lion, challenged International Lions Club members to “become knights of the blind in the crusade against darkness.”

From then on, the Lions committed themselves to preventing blindness and improving the lives of those who are blind and hearing impaired.

At the McGraw Lions Club in Cortland County, the 35 members work on a variety of local community service projects. Their biggest project by far is their “See” vision screening program.

Because as much as 80 percent of children’s learning is through vision, the need for early screening is especially urgent.

“If a child is visually impaired, like Helen Keller was, that does not mean that they can’t learn or that they won’t be successful. They absolutely can. It’s just a lot more challenging. If unaddressed, it makes it more difficult for them to reach their full potential,” said Cordes.

Bernardo agrees, “That’s why we do it. We want to help these kids do better in school and catch it early.”

According to the American Academy of Pediatrics and the US Preventive Services Task Force, instrument-based screening is a valid method for screening very young children. For more information about vision screening, contact your child’s pediatrician or family physician.