Jaime Anderson is a seasoned “mom of an asthmatic.” She’s dealt with many back-to-school moments since her now 11-year-old son, Adison, was diagnosed with asthma as a 3-year-old.

The return to school is tough for kids with asthma. Because they head straight into peak virus season and may be exposed to new triggers, they’re more likely to have an asthma attack.

Before school starts, Jaime schedules Adison a visit with his doctor to review his medications and update his asthma action plan. Jaime begins every new school year educating staff about her son’s disease.

“It’s hard,” Jaime said. “School staff can’t know everything. It’s up to the parents to make sure they do.”

Jaime, who is also executive director of the American Lung Association in Western New York, has learned a lot about helping her son safely start the new school year.

She has a slew of back-to-school advice for parents. Her first tip, however, begins with a video game, a mucus mob, and the fictional city of Lungtropolis.

Lungtropolis: Attack of the Mucus Mob

“Your child should know exactly what they’re dealing with,” said Jaime, who lives in the Rochester, N.Y., area. “They need to understand their triggers, recognize that they’re about to have an asthma attack and not be afraid or embarrassed to alert a teacher.”

That’s where the video game, “Lungtropolis: Attack of the Mucus Mob” comes in. It’s a free online game that the American Lung Association developed; players watch videos and get asthma-control tips.

“My son thought it was so cool, being able to play a video game,” she said. “But, he was also learning what he needed to know to feel comfortable talking to his teachers about his asthma.”

Parents shouldn’t assume that school staff – including the school nurse – understands how asthma works. Each kid is unique, with different triggers and warning signs that an attack is imminent.

Jaime recalled the time when school staff sent her son’s inhaler – but not his spacer – with Adison on a field trip. (Spacers help the medication from the inhaler reach the lungs.) Fortunately, Jaime also attended the field trip and had a backup spacer.

After the trip, Jaime educated school staff about the importance of spacers.

Sure, parents can talk to school staff and visit with the doctor. But moms and dads don’t have a lot of control over the back-to-school risk factors that can trigger asthma attacks:

“Students are also changing from a relaxed summer schedule to the structure of the school day and that can impact medication schedules,” added Kwan Chan-House, M.D., a Utica, N.Y., pediatrician and medical director for Excellus BlueCross BlueShield. “Late summer and early fall also are peak times of the year for ragweed pollen, molds and dust mites, which can impact children living with asthma.

“It’s not a surprise that a spike in asthma symptoms and flare ups among children with asthma typically occur beginning in late August and continue throughout September,” she added.

“I didn’t think of that”

Adison, meanwhile, is starting middle school in the fall and will be moving to a building that’s new to him.

“I don’t know how he’s going to react to the new environment,” Jaime said. 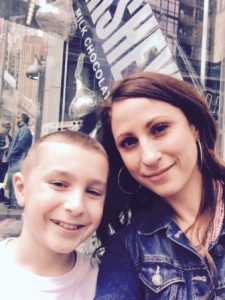 Jaime with her son.

When Jaime took Adison to his doctor this summer, they were surprised by how much the youngster had shot up and the weight he had gained.

Adison’s doctor tweaked his medication to ensure it would still work.

“He gained so much weight, we had to up his dosage,” she said. “I didn’t know weight gain would affect his mediation. I didn’t think of that.”

Jaime has a few more tips for parents:

“Games or other educational tools do more than educate your child about asthma. They can also be empowering,” she added. “It’s so important that your son or daughter feel comfortable talking to the adults in their life about their asthma, especially as they start a new school year.”