I recently dined on quite the spread: Homemade corn tortilla chips with southwestern black-eyed pea and corn salad. Oh, and apple crisp for dessert.

People with developmental and intellectual disabilities, and the staff who help them, whipped up this healthy and very tasty meal. They prepared these foods during the Arc of Monroe’s first-ever Cooking Matters class with Foodlink and Excellus BlueCross BlueShield.

The recipes were designed to be simple, healthy and safe to make for those with disabilities. But what I loved about the recipes was that anyone could easily do them!

Never again will I buy a bag of tortilla chips from the grocery store. I can make a healthier and lower-salt version with this recipe:

For a healthier twist, try whole wheat tortillas instead of corn tortillas. Serve with salsa, hummus, bean dip or chilli

Other recipes to try:

Janet Williams of Penfield helps people with disabilities at the Arc shop for food, prepare meals and do other things to live independently. 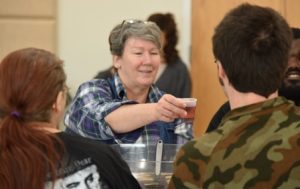 Janet Williams of the Arc of Monroe

“I think it’s harder for this population to be healthy,” Williams said. “Unhealthy foods are easier to access; they’re addicting and seen as more ‘cool’ among their peers.”

Williams learned, for example, that it’s OK to buy canned vegetables and beans, even if there’s added salt in the foods. Just rinse the foods to get rid of the salt before using them.

Having canned beans and corn in your pantry can make it easy to make simple foods, such as a healthy salsa.

“I’m really excited about what we learned,” she added. “It’s seriously good stuff.” 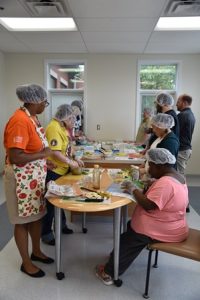 The program was made possible by an Excellus BCBS grant, which supported the classes and provided participants with coupons to shop at the Curbside Market truck, Foodlink’s farm stand on wheels. The truck was parked outside every class so participants and other Arc staff members could shop for healthy foods.