Playing sports may be a milestone in your child’s life, but it also may be another notch in the worry belt for you. You can handle bruised egos, sprains and strains and an occasional broken bone. But what about a blow to the head? What if your child suffers a concussion?

A concussion is a “mild traumatic brain injury that usually happens after a blow to the head.” And, unfortunately, more kids seem to be getting them.

Concussion diagnoses among teenagers spiked in the U.S. from 2010 through 2015, according to a study released in 2016. In addition to head injuries during sports, concussions can result from bumping your head when you fall, being violently shaken, and motor vehicle accidents.

You don’t have to lose consciousness to have a concussion.

Any athlete suspected of having a concussion should be removed from play immediately, said Nicholas Massa, M.D., Medical Director for Excellus BlueCross BlueShield.

“This will help reduce the risk of a worse injury,” he said, adding, “Your child should then be evaluated by a medical provider trained to diagnose and manage concussions.” 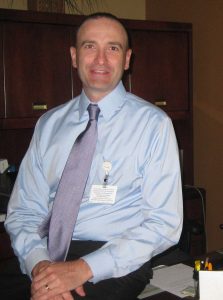 Until cleared by a medical provider, your child also should not participate in other activities that are associated with an increased risk of head injury, such as biking, skateboarding or climbing playground equipment, Massa said.

Inform Yourself About Concussions

Your child’s first defense against brain injury is your becoming an informed parent. And the time to do that is now, because, let’s face it, kids are going to be kids and get hurt, even outside the sports arena.

Take Morgan Tubolino of Mexico, New York. She and her brother were horsing around one Halloween about three years ago. Morgan fell and hit her head really hard. 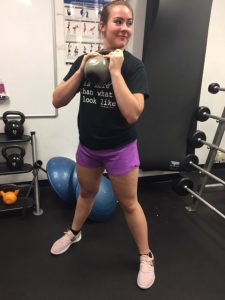 Or, take my son, Andy, whose head hit the windshield when the car he was riding in was in an accident. (And, yes, I was adamant that he ALWAYS wear a seatbelt, but he didn’t that day.)

Both Morgan and Andy were diagnosed with concussions.

Although most people recover after a concussion, how quickly they improve depends on many factors, according to the Centers for Disease Control and Prevention. Factors include:

Morgan, who was 14 at the time of injury, complained of constant headaches, said her mother, BetsyTubolino.

“Her vision would get blurry when she read. Her thinking was not clear, and she confused words.”

Andy was a soon-to-be Marcellus, New York, high school senior when his accident occurred. He would also be starting football practice that summer. Although rest is very important after a concussion to help the brain heal, I wasn’t confident that the discharge instructions to “take it easy” for a few weeks were enough, given the diagnosis.

Morgan’s doctor referred her to the Upstate Concussion Center at Upstate Medical Center. Andy ended up there, too. 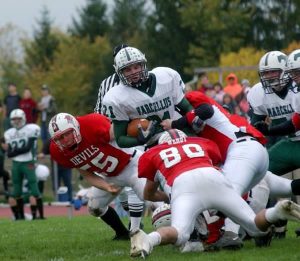 Brian P. Rieger, Ph.D., is the center’s Program Director. He is also Assistant Professor of Rehabilitation Psychology in the Department of Physical Medicine & Rehabilitation at Upstate Medical University.

The clinic’s team focuses first on education. It’s important to let the parent and child know what they should and should not be concerned about, Rieger said.

There is no sure test to determine if a child has had a concussion. In most cases, the brain looks normal on a CT scan or MRI, he said.

“Likewise, we know the brain is recovered when the child can engage in both physical and mental activity without triggering a headache or other symptoms. Return to risky activities is only allowed when the patient is symptom free at rest and during exertion, such as running or doing school work.”

Signs of a Concussion

Most children will recover from a concussion in a week or two, but others take longer. .

“In some cases, symptoms can last for weeks or months or longer than a year,” Rieger said. 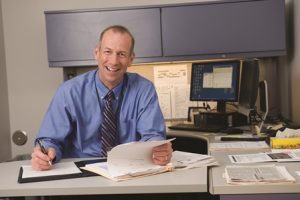 Your child, for example, may feel dizzy, light-headed and have balance problems. Their head and neck may hurt, and they may have problems sleeping.

Or, your child may get easily confused, distracted or lose track of time. He or she may have difficulty concentrating, paying attention and have trouble with learning and memory.

Changes can still go on in the brain even when the child appears to have recovered from a concussion. These changes can affect your child not only physically, but also mentally and emotionally, Rieger said.

Recovering From a Concussion

Betsy credits the center team’s commitment for her daughter’s return to health. “They took everything very seriously and explained everything they did and why.”

After a thorough exam, Morgan was prescribed occupational and physical therapy to help her vision and balance. She attended clinic/therapy sessions three times a week for six months and was followed for about a year. Treatment also included heat and stimulation to her head and neck to relieve pain.

The clinic also contacted the school about Morgan’s need for frequent breaks, extra time to complete tests, and a quiet, dark place where she could rest, if needed.

Morgan still gets headaches occasionally. She’s learned to manage side effects that pop up from time to time. Although she played volleyball pre-concussion, she wasn’t cleared to play her sophomore year. Now a senior, she prefers to work out in the school fitness center and concentrate on her studies. Her grades have returned to high honor status. She’s also studying to become a physician’s assistant through a Citi BOCES, SUNY Oswego and Oswego Health collaborative allied health program.

“We now know that we should pay as much attention to the child’s return to the classroom as to sports,” said Rieger.

Good thing for Andy. Although I was concerned about Andy’s too soon return to football, I hadn’t considered how a concussion would affect his schoolwork.

At the center, Andy went through several exercises to evaluate his hand-eye coordination, balance, and memory. The clinic notified Marcellus High School that Andy might need more time to finish his Regents exams. They advised the school’s coach that Andy should delay the start of football practice for a couple of weeks and then ease into a modified practice.

Fortunately, he’s not had any long-term side effects from the concussion other than he ALWAYS wears his seatbelt now.

“It’s important that a child not re-enter contact sports too soon as there is an increased chance of re-injury and worse symptoms if a child suffers another concussion before recovery from a previous one,” said Rieger, noting that increased awareness and recognition of concussion could be responsible for the increased number of concussions reported.

While most children who have had multiple concussions will not complain and appear to be acting perfectly normal, some may end up with more frequent headaches, trouble sleeping, memory problems, an inability to concentrate or even depression symptoms.

“The risk of these kinds of problems seems to increase with an increasing number of concussions,” said Rieger.

Parents may be worried that their child who has had a concussion will develop Chronic Traumatic Encephalopathy (CTE). The debilitating, chronic brain condition has gained media attention as more and more football players, boxers and other professional players in contact sports are diagnosed.

There is still a lot we don’t know about CTE, said Rieger.

“The jury’s still out whether concussion or just multiple blows to the head–even without concussion–is a greater risk factor for CTE,” he said.

“Until we know more, parents should be cautious and do all they can to prevent brain injury in the first place and seek immediate attention if it does happen.”

Rieger stressed that the culture of concussion must change, with coaches having zero tolerance for injured players not divulging their own symptoms or when players don’t report a teammate who talks about having headaches, feeling dizzy, etc.

“I don’t want to overly alarm parents,” he added. “Sports are good for kids, as long as we do what we can to keep them safe!”

The Centers for Disease Control and Prevention has a video library of topics related to concussions.