They say it takes roughly 21 days to create a habit. As I write this, my kids and I are on day 40 of staying home from work and school—just like everyone else—to keep ourselves and those around us safe.

I admit, I was one of those parents who had grand plans of creating a routine, a “new habit” if you will, that we would stick to. Everyone wakes up by a certain time, meals on a schedule, set times for schoolwork and my work, and time for exercise (after all, the excuse that there’s no time doesn’t really apply anymore!).

Well, “corona-cation” as my son repeatedly refers to this unusual time, seems to dictate our new habits. Make no mistake, my teenage boys and I know EXACTLY how serious this is and there’s no making light of what we’re all being asked to do. They haven’t seen their friends since in-person school ended on March 13, and they’re discovering that even though they don’t always like each other, they’re lucky they have each other to ride bikes with and to walk the dog. 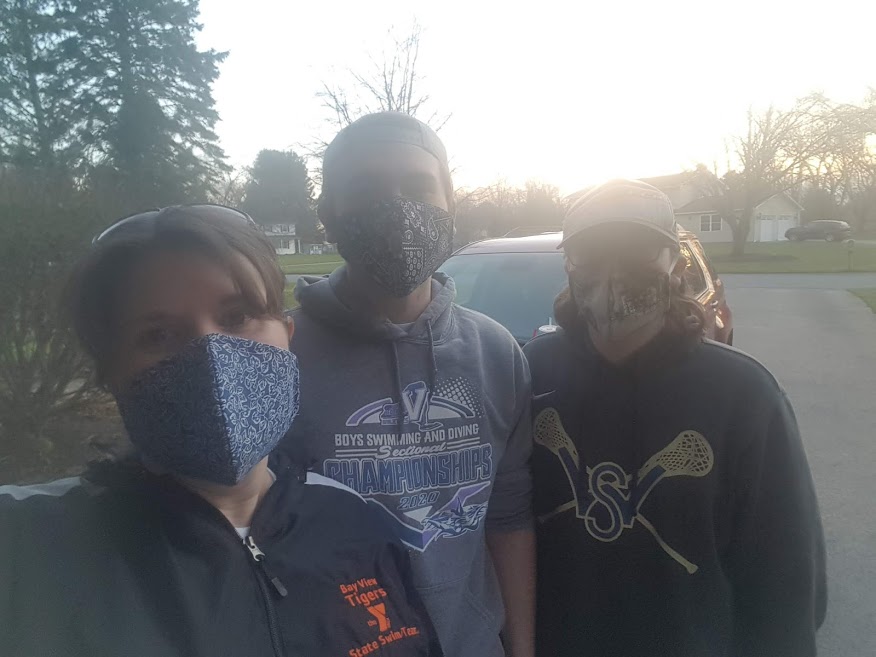 Deanna and the boys (photo courtesy of Deanna Vincent)

But because they don’t see their friends in person, the only place they interact with them is, you guessed it, in the gaming world. So, the routine I had hoped to adopt hasn’t panned out. My teenagers are “living their best life” right now. They’re in bed until around noon, they get up to eat (and eat and eat), do homework, get outside for a little while if it’s nice out, then game with their friends until long after I’ve gone to bed.

“Nothing so needs reforming as other people’s habits” – Mark Twain

My “new-normal” schedule? Well, it’s not much better. I’ve seen the jokes on Facebook; “don’t forget to change out of your daytime pajamas and into your nighttime pajamas before you go to bed!”  Ha. Ha. The only comfort is knowing if it’s being shared on Facebook, I can’t possibly be the only one living like this.

Overall, even though there’s no routine or habits forming at my house, everything is running smoothly, so why worry? I’m still able to focus on my work and the boys are getting things done. In fact, I haven’t had to pay much attention to their schoolwork at all, and assumed all was well.

Until I received an email from a teacher. Then another, then a third, followed by a phone call from the assistant principal. What the…?  That’s when I realized it was time to start “mom-ing” again and get my house back in order.

Meeting in the Middle-ish

The first step was to find a happy medium. It’s not realistic for me to be the mom who has a set schedule for everything—right down to when to do the laundry. Not that’s there’s anything wrong with that, but it’s just not me. I’ve always been more of a “fly-by-the-seat-of-my-pants” kind of mom.

So instead of set times, we have timeframes. I’m all about the “ish”—9-ish, 10-ish, noon-ish. So that’s the clock we live by right now.

Making the Most of It

I personally have some new-found habits that have formed as well.

These are unprecedented times that we’re all living in right now. There’s no manual or instruction book on how to do it or do it right. The best habit we can all embrace is being generous with the gift of grace, for ourselves and for those we live with. After all, tomorrow is a new day for many of us, which makes us the lucky ones. And when this is all over, that really is all that will matter.

2 thoughts on “A Happy Medium: Our Family’s New Habits in These Unprecedented Times”