I’ve always loved the traditions of Passover, the Jewish holiday that commemorates the liberation of the Israelites from Egyptian slavery. Now that I have my own family, I’ve adapted my own traditions in ways I didn’t expect but find exciting. Our new family traditions are on display the most at the family meal of Seder, which marks the first of the eight-day observance. (This year, the first night of Passover is April 19.)

Everything on a Seder plate carries symbolism and purpose. But then, my daughter became a vegetarian. She was bothered by the bone that is traditionally displayed on the Seder plate.

So we did what any family would do: improvise. 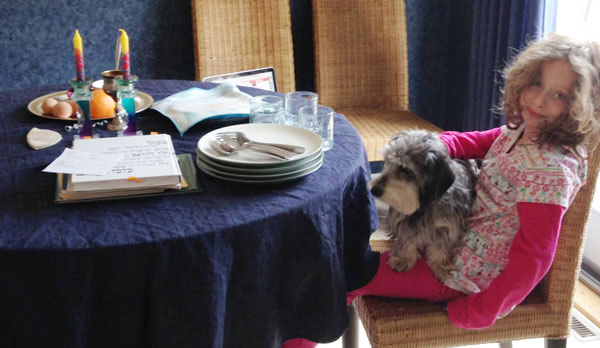 Shevah’s daughter helps set the table for the Seder.

We spoke with other vegetarians and discovered they replaced the bone with a beet. She’s not bothered by the egg on the Seder plate, but some replace it with an avocado pit. It carries similar symbolism, but without involving animals. There are even new additions to the Seder plate such as adding an orange to represent gender equality.

Then there’s the meal. There’s some debate in my household about what’s allowed. My husband’s family has Sephardic roots (mainly Southern European) and observe different food customs, allowing beans and corn, for example, whereas my Eastern European ancestors did not. Last year, we had a lively discussion about quinoa! The verdict? We ate it!

And I still enjoy some of the foods from my childhood, including gefilte fish and chicken soup with matzo balls. It’s fun to experiment with matzo over the week-long holiday. We also enjoy a visit to the Model Matzha Bakery at the Louis S. Wolk Jewish Community Center of Greater Rochester. 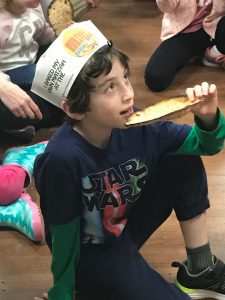 The Old and the New

Although my husband and I have adopted new customs, some are nice to hang on to from our childhood, like:

My fondest memories of Seder include reading aloud the story of the holiday. It was a three-hour affair, usually with my grandfather reading while the rest of us followed along or bustled about in the kitchen. We stretched it out by singing songs and lingering over the table after the meal. (We weren’t always singing in tune with each other!)

While many people my age remember the story being read from the Maxwell House version, my family prefers the New American Haggadah. Edited by Jonathan Safran Foer, it incorporates poetry, notable quotes and interesting stories in the telling of the Passover story. You can even make your own kid-friendly version with your children.

In telling the story of Passover, we ask why traditions during this observance differ from what we do most other nights. I particularly like highlighting this idea with my children: this holiday gives us the opportunity to talk about bigger ideas like fighting hunger. We eat matzo to remind ourselves that the Jewish people experienced hunger as they fled Egypt. But I also feel it’s important to take action, such as bringing leftover items to a local food bank.

There are even whole Seders revolving around women or the theme of freedom from slavery.

Passover traditions vary from family to family. Some Jewish families use only special dishes set aside for Passover, or remove all foods that won’t be eaten during the observance. I choose not to do those things because that’s not the tradition I’ve set with my family, but the reminders are always appreciated.

The most important thing, whether you stick with tradition or have incorporated new ideas into your Passover, is spending time with family, taking time to pause and reflect, and most of all, counting your blessings!

We’d love to learn more about other favorite Passover customs – new or old. Post your memories and recipes below. 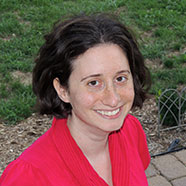 Shevah grew up in the Hudson Valley country side of Columbia County before moving to the Rochester suburbs. She enjoys travelling and exploring with her husband and two children and volunteering at her synagogue, with the PTA, and girl scouts. Shevah is a project manager at Excellus BCBS.

2 thoughts on “Out With Bones, In With Beets: Our Ever-Evolving Passover Celebration”