Lynn Johnson knew she should get a colonoscopy. She was 50 years old, the age when most people should start screening for colon cancer.

“But I was busy at work and I didn’t understand the value of the screening,” said Lynn of Penfield, New York. “I was probably also a little fearful. I ignored it. Of course, that was a mistake.”

Lynn had colon cancer, but didn’t know it.

About a year later, Lynn landed in the hospital in excruciating pain. Tests revealed she had a tumor growing in her body that had perforated her colon. Lynn had stage 2 colon cancer. She needed several surgeries to remove the tumor and repair her colon.

Because the tumor had perforated her colon, the risk that the cancer would spread was high. So she also needed chemotherapy in the form of horse-pill sized medications she had to choke down over 10-day periods for the next six months.

“The doctors would have probably caught my cancer earlier if I had a colonoscopy at age 50 like I was supposed to,” said Lynn. “I might have avoided a lot of the pain and suffering and skipped the chemotherapy which compromised my immune system.”

2nd leading cause of cancer deaths

Lynn’s story isn’t unusual. About 1 in 3 upstate New York adults between the ages of 50 and 75 haven’t been screened for colon cancer, according to research findings from Excellus BlueCross BlueShield. 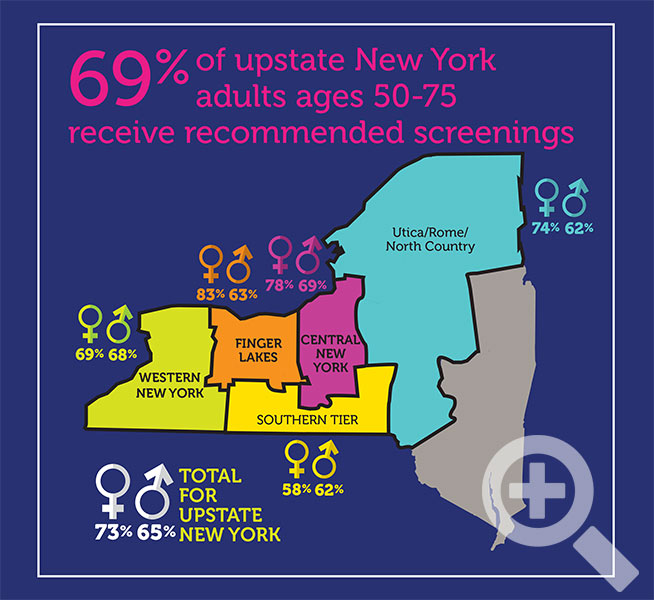 Lynn is lucky, especially considering that colon cancer is the second leading cause of cancer deaths among U.S. adults. Across New York state, about 3,000 people die each year from the disease, according to the New York State Department of Health.  Lynn has been cancer free and in good health for over five years.

The Importance of Screening

Regular screenings can detect early-stage colon cancer before symptoms develop. Early detection is important because treatments are more likely to be successful for early- rather than late-stage cancer.

The U.S. Preventive Services Task Force recommends adults ages 50 to 75 get screened every 10 years. Individuals who have colon cancer risk factors, including a family history of colon cancer or previous polyps, may need to have their first screening at a younger age and/or more frequently.

A colonoscopy is the most thorough screening test for colon cancer and is proven to prevent the disease. Removing benign or pre-cancerous polyps during colonoscopy may not only prevent colon cancer, but also reduce deaths from the disease, according to the National Institutes of Health. A colonoscopy is recommended every ten 10 years starting at age 50 if no polyps are found.

Colonoscopies: The test we love to hate

For many people, preparation for a colonoscopy is worse than the procedure itself. The day before, you have to drink a liquid laxative to help clean out your colon and adhere to a clear liquid diet so your doctor has a visible view of the inside of your colon to spot cancer or any potentially cancer-causing polyps. During the colonoscopy, a doctor uses a long, thin, lighted tube to check your entire colon and rectum for polyps or cancer. These polyps can be removed during the test. You’ll probably be offered mild sedation to help you relax during the short procedure which is usually done on an outpatient basis.

“But it’s completely worth it—especially if it helps you fight off cancer,” Lynn said.

“A colonoscopy is the gold standard when it comes to screening because it has the potential to catch colon cancers in very early stages, or identify pre-cancerous polyps that can easily be removed at that time,” said Dr. Nicholas Massa, medical director at Excellus BlueCross BlueShield. “Talk with your doctor as there may be other options for you, should you not be a candidate for colonoscopy.”

Other screening options include tests that look for blood in your stool, like the Fecal Occult Blood Test (FOBT) and a Fecal Immunochemical Test (FIT), and tests that look for DNA from tumor cells, like Cologuard. Talk with your doctor about which option is best for you. Colon cancer screenings are covered in full as an ‘essential benefit’ for most health insurance plans.

Listen to your older brother 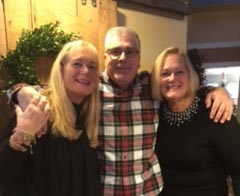 Lynn (right) with her brother and sister.

Lynn skipped her colonoscopy at age 50, despite the advice of her older brother.

Her brother, who is a few years older, had pre-cancerous polyps removed from his colon during a colonoscopy. He bugged Lynn and her twin sister to get the procedure done.

Lynn’s sister got a colonoscopy. But Lynn did not.

“My advice? Get a colonoscopy. It could save your life,” Lynn said.

“Oh, and listen to your older brother!” she laughed.

Learn more about colon cancer screening from a viewable and downloadable Excellus BCBS infographic. For more information about preventive screenings, talk with your doctor or visit ExcellusBCBS.com.

6 thoughts on “Too Busy for a Colonoscopy? A Story of Regret and Redemption”