I trained hard for my first Tough Mudder, a mud run through an obstacle course that included barbed wire and dangling electrical wires.

But a bulky T-shirt almost threw me off my game. I was running with a team, and we ordered identical T-shirts. I didn’t try on my shirt until 10 p.m. the night before the race. It was way too big.

Here’s Janette (left) with her Tough Mudder teammates. Her shirt might not look baggy, but that’s because her fellow runner is holding the back of her shirt, so it doesn’t look too big in the photo!

You need to wear tightly fitted clothes to compete in a Tough Mudder. A bulky shirt will slow you down, because it will be heavy with mud and get stuck as you’re crawling through barbed wire.

Fortunately, my boyfriend ran to the store and bought a replacement shirt while I got some beauty sleep before the big event.

Learn from me, and don’t go to your next 5k, half-marathon or mud run unprepared! If you bought new running clothes, for example, make sure you try them on long before race day.

I have friends who don’t do anything to prepare for a race other than making sure they’re able to run the distance. Unfortunately, this has caused a lot of problems.

One friend was late to a very popular race, the Turkey Trot.  Because she arrived late, she had to park far from the starting line. When she arrived, the race had already begun, and she was well behind the other participants.  She hated being the very last participant and did not finish very well.

Here are more tips to help you hit that personal record (PR), tackle a marathon, go from couch to 5k and avoid race day snafus:

The week before the run …

The night before the run…

The morning of the event…

If things don’t go well, that’s OK. It’s important to embrace the unexpected and be safe. If you’re late to a 5k, mud run or marathon, don’t try sprinting fast to catch up. You wouldn’t want to strain a muscle or slip on wet autumn leaves. No matter what happens, remember to have fun! 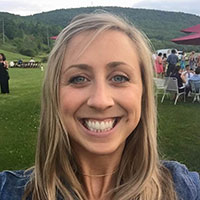 Janette was born and raised in Rochester, and loves this city! She loves to travel with her boyfriend, Christian, and explore exciting places in Upstate New York. She's very close with her family and loves playing soccer and basketball with friends. She also developed a passion for racquetball in college after her dad introduced her to the sport. She loves the TV series, "The Office" and her favorite character is Michael Scott. She savors the warm weather in Rochester and dresses extra warm in the winter because she, admittedly, is always cold! Janette is a workplace wellness consultant at Excellus BlueCross BlueShield.